SOMA is a collaborative project with Milagros Copara to enhance diversity within UC Davis and the neuroscience graduate group. The project was initially funded by a University of California Davis Diversity Inclusion and Innovation Grant that Lauren and Milagros received.

Statement of Problem Demographics within neuroscience vastly mismatch the actual distribution of minority communities within the United States population [1]. In a 2011 survey report of 97 U.S. neuroscience graduate programs, only 12% of predoctoral trainees were minorities (African- American, Hispanic-American, Native-American, “Other”) - a statistic that reduces to only 4% of postdoctoral trainees and 5% of tenure track faculty [2]. Increasing the visibility of underrepresented scientists is a critical component to addressing this inequity. Without visibility, the aforementioned unequal distributions are inevitably perpetuated. At UC Davis, there is a marked underrepresentation of individuals belonging to marginalized communities who are invited to communicate their research. Our project provides a platform for scientific researchers to share a diverse set of ideas and perspectives, upholding Goals 3 and 4 of the UC Davis Diversity and Inclusion Strategic Plan. This unique exchange will be further developed through dialogue between our speakers and students in social spaces, like pre- seminar lunches and post-seminar dinners, which will hopefully lead to fruitful professional networks and mentorship opportunities. 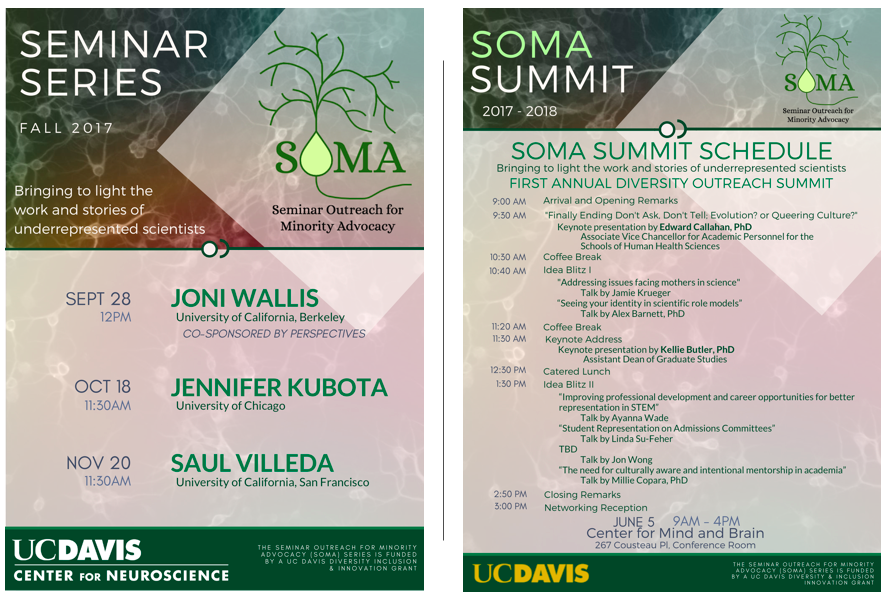 Renewed funding for 2018-19! Thanks to the UC Davis neuroscience community’s interest in this seminar series, we have been able to secure funding for three seminars in 2018-19! Details are available on the neuroscience graduate group website.

Renewed funding for 2019-20!
We are happy to report that SOMA is now receiving stable financial support through the UC Davis Neuroscience Graduate Group.